There were over 100 champions currently playable in League of Legends. But out of all of them, Garen was one of the simplest and most powerful. And he was relatively easy to master. Once he hit the point where he became fed and snowballed, he’d turn into something akin to a raid boss for the other team. Garen ended up developing high armor, high health, health regen, and his skills buffed his armor further. On top of this, his ultimate worked as an instant execution. A fed Garen was a threat anywhere on the Rift.

Now, Garen was normally a Top lane champion where he could slowly scale and then stomp all over the enemy team during the mid-to-late game phase. But even when Garen was played in the Support role, he could still become a formidable threat as long as he got enough kills and assists. And unlike the more traditional Support champions, he could still hold the front line and tank damage like a Top lane champion.

The gank on Rumble in the Top lane that started with a tower dive earlier was a good example of this. Rumble still had a little more than half of his health left, but Lin Feng’s Garen charged into him under a Tower with zero hesitation or concern. Then in the blink of an eye, he’d shaved away all of Rumble’s health. The way it worked, any champion with health below 50% was within Garen’s killing range, as long as Garen’s ultimate was off cooldown. All Garen had to do was run in, spin to win, and unleash his ultimate. It was that simple.

And with that Rumble kill under his belt, Lin Feng’s Garen started scaling even harder and better. Now that he’d finished setting the Top lane up, Lin Feng was trying to figure out what to do next. He started running around through the Blue Team’s top-side Jungle and stealing camps from the Blue Team’s Jungler. That was when he spotted Rek’Sai, the Jungler on the Blue Team. Rek’Sai also saw him, and immediately started running away in the opposite direction. Lin Feng shouted, “Hey! Whatcha running away for? Come here! Come on, fight me!”

Rek’Sai had no intention of fighting Garen, and continued to flee. He eventually managed to make his escape, once Lin Feng grew bored of the chase. It was both hilarious and a testament to Lin Feng’s skill that a lone Support Garen could force Rek’Sai to flee for his life. But since there was nothing happening in the Jungle or with Rek’Sai, Lin Feng decided to recall back to base and then returned to the Bot lane. Just in time for another explosive fight with Jinx and Morgana.

The second Lin Feng’s Garen arrived back in the Bot lane, Tang Bingyao’s Kalista initiated the fight with Fate’s Call. She shot Garen right into the Blue Team’s duolaners like he was a cannon ball. Jinx got knocked up into the air from the impact. Morgana reacted quickly and started shooting out a Dark Binding. But Lin Feng activated his Garen’s Decisive Strike the second he landed, and took advantage of the increased movement speed to avoid the Dark Binding. He charged at Jinx and slashed down on her just as she landed, which also Silenced her! But Garen wasn’t done yet, not by a long shot. He moved his body like a cyclone, cleaving into her with every blade stroke—Judgment!

This did so much damage to Jinx that Lin Feng had no need to use his Garen’s ultimate, Demacian Justice. Tang Bingyao caught up and started hurling spear after spear into Jinx, and then ripped them all out with Rend!

《You have been slain!》

Gang Zi watched his screen turn gray, while the Announcer’s voice dispassionately announced his death in his ear. He gnashed his teeth and slammed his mouse down hard on the mat. “Fuck!”

Once Lin Feng and Tang Bingyao picked up the kill on Jinx, Team Shanghai secured an absolute advantage in the Bot lane. Gang Zi was completely shut down, there was nothing more he could do in the lane with his Jinx. Even if Morgana joined in, the two of them together couldn’t take Tang Bingyao’s Kalista out. That’s how fed she was at this point in the game. Jinx and Morgana had no other choice but to be pushed back over and over in the Bot lane, until the Blue Team’s Outer Tower was destroyed.

With the Tower down, Lin Feng recalled his Garen back to the base to heal up and purchase some items. Then he built up to the Boots of Swiftness. With those secured on his Garen’s feet, he charged out of the fountain and started roaming around the map again. “Come on! LET’S GOOOOOO!” The movement speed buff from the Boots of Swiftness had made his Garen even more mobile than before. Apart from LeBlanc, who had two dashes, there was no champion on the Blue Team who could escape from him now.

Lin Feng’s Garen ran though the Blue Team’s Jungle without a care in the world. While he did this, Lin Feng had no idea how much he was pissing the lads off, especially since none of them could 1v1 his Garen, despite the fact that he was only the Support. And so, blissfully unaware of the effect he was having on the lads, Lin Feng continued harassing the Blue Team in their own Jungle. He cleared all of Rek’Sai’s camps and left a ward behind on each one as a calling card. Lin Feng had decided that his Support Garen was done with camping out in bushes in the Bot Lane. Now, he was going to roam the enemy Jungle like a tiger on the hunt, waiting for his prey.

14 minutes from the start of the game, Lin Feng finally caught sight of Rek’Sai in Blue Team’s top-side Jungle. His eyes lit up and he yelled, “Don’t run!” With those words, his Garen charged at Rek’Sai with Decisive Strike. While his Garen chased after Rek’Sai, Lin Feng happened to glance down at his minimap and noticed LeBlanc was missing from the Mid lane. “Eh?” Lin Feng muttered. “Where’s LeBlanc?”

“RUN!” Zeng Rui shouted in the voice chat. “Jinx and LeBlanc are closing in on you right now! Come towards me!” As soon as Zeng Rui shouted out the warning, two champions appeared out of the fog of war in the Jungle. LeBlanc and Jinx. And the two of them were running towards Garen as fast as they possibly could!

“Tsk tsk, they must really want me.” Lin Feng said, clicking his tongue. He immediately started running back up toward the river. Rek’Sai joined up with Jinx and Leblanc, and now the three champions from the Blue Team were hot on his tail with no intention of giving up. Lin Feng’s Garen had gone from hunter to being hunted!

During this game, Gang Zi and his lads had truly come to despise both Lin Feng and his Garen. In their minds, Lin Feng’s meddling was half responsible for how badly they were losing this game. So they’d all come together with a singular thought. The outcome of the game no longer mattered to them, all that did matter was making sure that Lin Feng’s Garen died and that Lin Feng suffered!

Jinx, once she was in attack range, used Zap. She fired her plasma rifle at Garen and slowed him down. LeBlanc dashed forward with Distortion and cast Sigil of Malice and Ethereal Chains at the slowed Garen. The mystical conjured chains flew through the air and wrapped around Garen, rooting him in place.

Gang Zi’s eyes lit up. “We can kill him! Focus the Garen!” He had his Jinx switch to her rocket launcher, then started blasting away.

As Garen’s health quickly dropped, Zeng Rui cried out, “Come over to me! I’m here!” His Orianna was rushing down the river entrance toward Garen.

Lin Feng’s eyes took on a sharp glint as he noticed how all three enemies were positioned. “Nah, there’s no need to run Zeng Zeng! Just follow up on me!” Without giving Zeng Rui any time to respond, Lin Feng had already pressed down on his D key—Flash! His Garen was wrapped around in a dazzling motes of light as he blinked backwards into LeBlanc.

Gang Zi’s pupils constricted as he felt a cold chill run down his spine. T-this isn’t good! He’d finally noticed what was happening, and started trying to back away. But it was too late.

Garen slashed down on LeBlanc with Decisive Strike, silencing her!

“Coming!” Zeng Rui cried out, immediately seeing the opportunity. He also flashed forward with his Orianna and sent her Ball flying toward Garen—Command: Protect! At this moment, Lin Feng was right in the middle of LeBlanc, Jinx, and Morgana. “Perfect!” He slammed down his R key, and a powerful electromagnetic burst ripped out from Orianna’s Ball—Command: Shockwave!

Standing behind Team Shanghai’s members, Qian Lu’s eyes were beaming. “That turnaround… that was beautiful!”

The Cutest Thing We've Ever Seen!

Dev Thought: Ya know, I’m normally the guy standing here talking about what a shit show the internet has become and how it’s turned into the largest global forum for dogshit people to broadcast their dogshit thoughts. But every once in a while, something genuinely beautiful comes up that reminds me what a powerful tool the internet is and reminds me of the potential for greatness that lies buried beneath all of that dogshit. This is one of those days. It all started because Daoist Piousfire, one of the readers and a mod on our Discord server, has an addiction to Snapchat. We’re not entirely sure why, because he’s not a 15-year-old girl. And on any regular day, I’d just make fun of him for his constant need to send 4+ snapchats every day. But today, his Snapchat addiction led to the discovery of something of such surreal wonder. It really is the cutest thing I’ve seen in a long time. Behold! Our first foray into webcomics, the story of Daoist Piousfire and LittleShanks!

By the way, this is what I believe webnovels are about. Making friends, doing weird shit together, laughing about it. Because the real treasure is not the subpar plot or the “mystery reveals”, its the friends we make along the way. That said, I encourage everyone to come hang out with us and just become regular bros and do regular bro things. Like playing games or watching movies or talking about books. The whole MPREG bros thing, we should just let that be a Shanks and Daoist Piousfire thing. 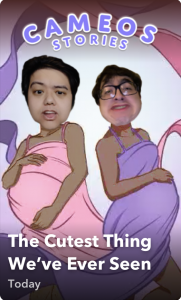 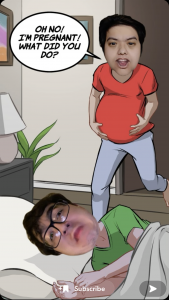 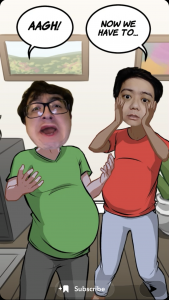 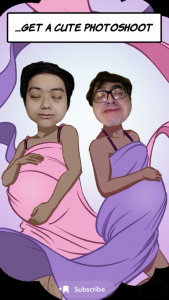 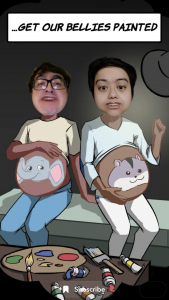 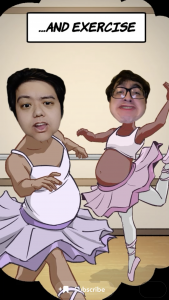 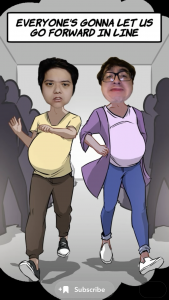 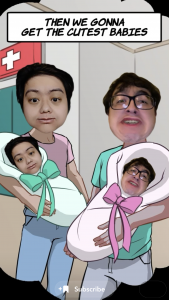 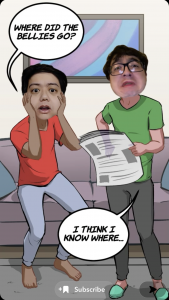 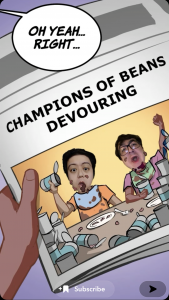