The turnaround play that Lin Feng’s Garen had just pulled off with the help of Zeng Rui’s Orianna, it was eerily reminiscent of a similar play made by God Roundy. One that was immortalized in the minds of many League of Legends fans across China, and objectively one of the most spectacular plays in recent memory. It was when God Roundy’s Hecarim pulled off a turnaround 5-man ultimate during the Season 5 World Championships. Neither Gang Zi nor any of his lads expected Garen to pull off something similar, and they were shocked out of their minds when it happened.

Slowed down, the pivotal point that initiated the play was when LeBlanc used Distortion to close the distance between her and Garen. That was a completely reasonable and normal thing for LeBlanc to do, against any other champion. If something in the engage went wrong, LeBlanc could always just recast Distortion to retreat back to her original position. But this was only true against any other champion. When faced with a Garen, that strategy completely fell apart. Lin Feng’s Garen had Flashed right at LeBlanc with a Decisive Strike cued up and silenced her. This meant that LeBlanc could no longer use Distortion’s recast to escape, nor could she use any of her other abilities. She was trapped and helpless against Garen’s rage.

The next part of the play was Zeng Rui’s Orianna. When Gang Zi saw Orianna approaching, he figured out what was about to happen. Which is why he shouted “Careful! Dammit! Back! Back! Back!” But it was too little, too late. His warning couldn’t come through faster than Zeng Rui’s mechanics. LeBlanc, Rek’Sai, and Jinx were all close enough to each other that Zeng Rui’s Orianna could lob her ball right into the middle of them and activate her ultimate—Command: Shockwave! The resulting electromagnetic burst swept through all three of the enemy champions and then pulled them right up against Garen’s blade. All of this took place mere seconds after Garen silenced LeBlanc with Decisive Strike.

But Zeng Rui wasn’t finished after setting up the three enemy champions for Garen. His eyes glinted fiercely as he followed up with Command: Dissonance! A second, smaller electromagnetic wave pulsed and inflicted a further slow on the three champions from the Blue Team. This meant that they would have even more difficulty escaping from Garen’s blade. On top of this, the combination of attacks from Orianna’s ball destroyed half of LeBlanc, Rek’Sai, and Jinx’s health.

Without missing a beat, Lin Feng followed up on Orianna’s attacks. His Garen did the typical Garen thing, which is to spin-to-win. Garen started rapidly spinning with his blade held out—Judgment! Damage values floated up into the air as his blade cleaved through the three champions around him.

LeBlanc tried to walk away as Garen’s blade bit into her health, but Garen stuck close to her as he spun. And with the silence from Decisive Strike still in place, she had no way of escaping with Distortion. Her hands were completely tied! And in the blink of an eye, LeBlanc’s health fell to one third. Making things worse was that there was still half a second left before the silence wore off, and LeBlanc’s health had fallen low enough that she could be executed by Garen’s Ultimate. A fact that both the LeBlanc player and Lin Feng recognized at the same time.

Lin Feng narrowed his eyes. “You’re not getting away!’ He pressed down on his R key to unleash Garen’s ultimate—Demacian Justice! A gigantic and magnificent sword of light descended down from the sky and bisected LeBlanc! Her health dropped to zero, and she collapsed dead on the ground. The LeBlanc player could do or say nothing as his screen faded to gray, much like his face.

《You have slain an enemy!》

Once LeBlanc was dead, Lin Feng looked for his next target. His eyes fell on the Jinx, and he decided that she was easy prey. Jinx currently had no Flash and no way to escape. On top of this, Zeng Rui’s Orianna had brought Jinx down to critically low levels of health with Command: Attack. Lin Feng’s Garen finished her off with a single auto attack.

The only one that managed to escape the wheelhouse of slaughter was Rek’Sai, who got away through one of the tunnels she’d dug before. But even with Rek’Sai still alive, Lin Feng and Zeng Rui had dealt a heavy blow to the Lads Team, one that they were unlikely to recover from.

As for Gang Zi, he was incoherent with rage as he watched Garen walk away while his Jinx and LeBlanc lay dead on the ground. His blood pressure shot up so high that he nearly fainted.

The long and short of it all was that Gang Zi and his lads had no way to counter Lin Feng’s Garen. If Garen didn’t want to fight them, it was impossible for them to chase him down and kill him. But if Garen did want to fight, they had no way to protect their backline from his blade. The worst part about all of this, as far as Gang Zi’s thoughts went, was that Lin Feng’s Garen was only a Support! Gang Zi could not even begin to fathom how a Support was somehow carrying Team Shanghai.

As for the rest of the lads, they couldn’t figure out what to do in this game. At this point in the game, it was like they were up against two fed Top laners. One was Irelia, and the other was Garen. They were caught in the lowest circle of hell, where they had no counter for either Irelia or Garen! And by the time they figured this out, 20 minutes had gone by since the start of the game. The gold gap had widened to over 15,000.

The lads all quickly came to the same conclusion. They had no hope of winning this game. Each of them looked at Gang Zi in turn. Gang Zi nodded as he clenched his teeth. He started the surrender vote, and every one of his lads voted yes. Their nexus exploded. The lads had learned a hard lesson by playing this game that they had no way of winning. It took a brick load of humiliation for them to realize that the high schoolers they mocked were far better than them. So much better that it wasn’t funny.

When the Lads surrendered, Lin Feng clicked his tongue. “Aww, already? I’m not even at full build yet!”

Fortunately for Gang Zi and his lads, they didn’t hear Lin Feng. If they did, whatever shred of dignity they had left would’ve been obliterated.

The so-called friendly scrim had ended with Team Shanghai’s overwhelming victory.  Gang Zi and his lads stood up with unsightly expressions on their faces. They struggled and failed to come up with a decent excuse for their defeat, and quickly left the room without even saying goodbye.

Qian Lu laughed and shouted at their backs, “Take care! I won’t see you out! Come again!”

Right now, at this very moment, Qian Lu was incredibly pleased with himself. Now that he’d watched this game, he was more than confident in his decision to contract Lin Feng and the rest of Team Shanghai. He knew deep in his heart that this team was definitely more than good enough to represent his internet cafe. More than that, he was convinced that every other internet cafe that came to challenge his branch was destined to lose as miserably as the Lads had!

While Qian Lu was lost in his thoughts and metaphorically patting himself on the back, Lin Feng got up from his seat and walked over to Qian Lu. “So, Ol’ Qian. Did we pass your little test here?”

Qian Lu was stunned by the question. He was not expecting it, nor did he think Lin Feng could see his devious manipulation. But one look at Lin Feng’s eyes snapped Qian Lu back to reality. He clasped his hands together and nodded with an awkward small. “Ah, yes, yes! That was marvelous! All of you got full points!”

Lin Feng, despite how he came off, was actually not as airheaded as he came off sometimes. The truth was that he’d seen through what Qian Lu was trying to pull the minute the Lads walked in through the door. He just didn’t care enough to question it or do anything about it. The whole situation was one that Lin Feng was more than familiar with. Back in Season 1, when Lin Feng played with Tian Tian, Silent, and the rest of their team, they had to deal with people like Qian Lu all the time as they hopped from internet cafe to internet cafe. Lin Feng understood that the deal was only official once they proved themselves.

And now that this rote formality was over, Lin Feng smiled and extended his hand out to Qian Lu. “Alright then, it’s settled. We’re friends and officially working for this branch of the NetCow Cafe from now on!”

Qian Lu’s eyes went wide. Then, he broke into a rare, genuine smile. He grabbed Lin Feng’s hand and shook it. “Yes! Let’s be good friends and get along from now on! Haha!”

Dev Thought: Occasionally, I get bored. Sometimes, its because I’m stuck in a rut with a chapter or studying or doing something else I don’t really want to do. So I try to come up with ways of sparking my brain back to life by throwing weird situations that stretch the moral and ethical boundaries of society, the boundaries of philosophy and generally force critical thinking at Shanks. He’s not exactly fond of these conversations because they’re genuinely weird situations. But I think we both grow from the experience. This is one of those conversations. Enjoy! 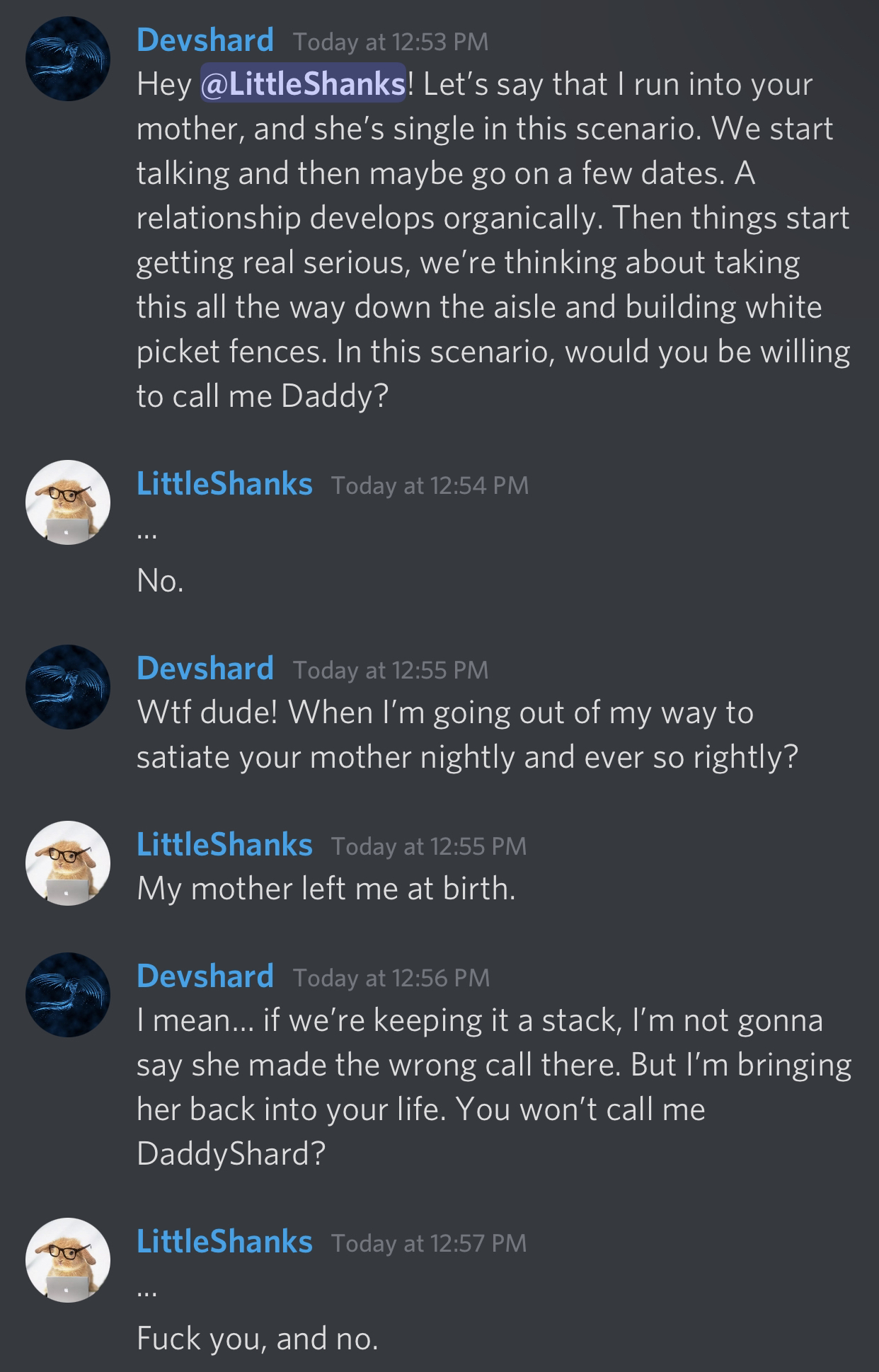