It took the players and the owner from the third team a minute to figure it out. But they eventually did, and collectively frowned. They were annoyed now. Especially because they had more than enough reason to back the pride they had in their strength. They were from the Sacred Star Cafe, and their triumphs on the first day of the Battle Bonanza placed them at the head of the pack. They fought hard and proved that they unquestionably belonged at the top. This was the sixth internet cafe that Sacred Star Cafe had come to challenge today. In the last five challenges, Sacred Star Cafe’s team had won four. They only had one loss to their name. And now they were being looked down upon by a high schooler!

The entire team exchanged looks that said the same thing. That they would not stand for this humiliation! “We were even being nice, offering to let them eat their dinner first… Fine, if that’s how they want it, let’s start! What do you say, Boss?” one of the players muttered.

Sacred Star Cafe’s owner turned to his players and said, “Don’t hold back. I want you to go all out right from the start!” His lips curved into a cruel smile as he added, “They want to eat dinner soon, right? So let’s be nice and help ‘em get this over with quickly!”

While Sacred Star team’s made up their minds to pummel the NetCow Cafe, Lin Feng and the others were also talking strategy for the upcoming match. It was also oddly similar to the one that the Sacred Star team just had.

“Yeah! Let’s get this over with quickly!” Lin Feng exclaimed as he pumped his fist into the air.

It was clear that both teams wanted to finish the match quickly. But they wanted a quick finish for very different reasons. Sacred Star wanted to teach a lesson and soothe their damaged pride, while NetCow Cafe simply wanted to finish quickly so they could eat dinners while it was still hot. This match was one where two truly profound ideologies clashed against each other to determine an answer to a question that has plagued humanity.

“Sounds good to me! Alrighty then. If we’re going to do this, then we need to play seriously…” An Xin smiled gently after she spoke. But there was a frightening pressure and caged ferocity behind her words. In the previous matches they played today, the NetCow Cafe team had not been playing seriously at all. They swapped roles and played odd team compositions. Partially to make the matches more fair, and partially for their own development and practice. But that was done for now. Playing seriously meant that they would be running real team compositions and everyone would be back in their regular role. That meant that Lin Feng would be back on Mid.

In other words, the fate of Sacred Star Cafe was sealed.

There was nothing more to be said. Both teams got up on the stage and readied themselves up. The next best-of-three in the Battle Bonanza had started!

The first game ran for a whooping 31 minutes. This was longer than any game that the NetCow Cafe team had played against a challenging team. But that wasn’t to say that the game went well for Sacred Star. It was clear that they were indeed better than the others that had come to the NetCow Cafe before. That’s why they didn’t collapse before 20 minutes like the others. But they couldn’t hold on forever. Despite their best attempts, they lost two inhibitors and were eventually aced by the NetCow Cafe. Their inhibitor exploded shortly after.

Sacred Star’s team did not take the defeat well. All of their expressions turned dark, and they spoke in tense but hushed whispers. It wasn’t clear exactly what was being said, but the gist was clear. The NetCow Cafe’s team was significantly more powerful than they expected. It was clear to them now that they weren’t being looked down on or underestimated. NetCow Cafe’s team was dimensions ahead of them in terms of strength!

They didn’t have too much time to brood or wallow. The second game started up mere minutes after the first one ended. This was the deciding match, and Sacred Star made it clear that they were not going to go down lightly. They no longer underestimated the NetCow Cafe’s team. This was evident from how targeted and calculated their bans were during champion select. And it was even more so seen once they got onto the rift. Sacred Star’s team was playing more seriously than they had in the previous game. They were pushing themselves to their limits with the hope of going beyond!

Once the game actually started though, it was starting to look like all of that effort would be for nothing. It’d been 15 minutes since the second game started,  and the flow of the game was looking eerily similar to that of the first game. NetCow Cafe was already ahead of Sacred Scar by 3,500 gold.

Qian Lu had already chalked this game up as a win in his mind. But he still watched out of interest, because Sacred Star was a team of significantly higher caliber than the ones that came before. Then the doors of the NetCow Cafe opened again. Qian Lu’s heart dropped at the thought of another team coming in to lose, and more money flying out of his account. But it started beating again when he saw that it was a delivery boy carrying large bags of food. The takeout he’d ordered for the team had arrived. Qian Lu walked over to take the food from the delivery boy.

Lin Fen also glanced when the doors opened and noticed the delivery boy. His eyes glistened and he smiled, “Eh? The food’s here! Alright then! Let’s end this quickly! My stomach’s growling cause I’m a hungry bear!”

Sacred Star Cafe’s team had no idea what just happened. But out of nowhere, they started to feel even more pressure bearing down on them from the NetCow Cafe team. Especially from the Annie in the Mid lane. She was already oppressive, but now it was amped up to an entirely different level. The aggression was palpable in the lane. The poor boys from Sacred Star had no idea that the root of all their misery was the arrival of a delivery man with takeout food.

The game clock now had 17 minutes on it. The second Dragon was about to spawn, and both teams hovered around the Dragon Pit. They were setting down wards and feeling each other out for an opening. Lin Feng’s Annie managed to circle around the Dragon Pit and then around Sacred Star Cafe’s team. Then, without them noticing her at all, she decided to engage with a sudden Flash! Just as she materialized, she summoned Tibbers, her gigantic manslaying teddy bear, and landed a two-champion stun on the opposing bot lane duo. Before they could react or move again, Annie followed up with her full damage combo and instantly took out Jinx. The enemy AD-Carry was down and out before the team fight even started in earnest! The rest of NetCow Cafe’s team also engaged. In the end, that team fight went to the NetCow Cafe’s team. They had taken out 3 of Sacred Star’s champions and lost none of their own.

Things just went even further downhill for the Sacred Star team from that point on. When the game hit 20 minutes, NetCow Cafe was ahead by 6,000 gold. There was nothing Sacred Star could do other than helplessly run into the mill of death that the NetCow Cafe team had become. They realized that 5 minutes later, and unanimously voted to surrender. The game lasted 25 minutes, and NetCow Cafe was the winner!

As the victory crest floated up on the large screen above the stage, the customers in the internet cafe erupted into cheers again.

The NetCow Cafe’s team was less concerned about celebrating the victory and more concerned with celebrating the arrival of their dinner. Right after the match ended, Lin Feng and the others rushed down the stage to pick up their food.

The Sacred Star Cafe’s team was still up on the stage. They had complicated expressions on their faces. They were sad that they lost, yes. But they were also aware of how much better than them the NetCow Cafe’s team was.

During the two games, Sacred Star’s team realized that their opponent was in a completely different class. There was simply nothing they could do against the NetCow Cafe. There was no way to push past a wall that loomed so high. Compounding this was that the players from Sacred Star had gotten a sense that the NetCow Cafe’s team was still holding back. That alone was enough to make their hearts skip a beat. The players from the Sacred Star Cafe glanced at each other and bitterly smiled. No words needed to be said. They were all thinking the same thing. The Battle Bonanza was full of hidden dragons and crouching tigers.

The truly mindblowing part about this whole thing was that this wasn’t even the first time that the Sacred Star’s team had run into an opponent in a different league today. Before they came over to the NetCow Cafe, they ran into another team that was also absurdly strong.

It does need to be clarified that the Sacred Star Cafe’s team definitely ranked among the top contenders in the Battle Bonanza. Their record before arriving at the NetCow Cafe was 4-1. Their first loss of the day was against Inky Cafe’s team. That internet cafe’s team was more or less at the same level as Sacred Star’s. Perhaps even slightly better. Sacred Star had given it their all, but were still defeated 2-1 by the Inky Cafe.

But it wasn’t the Inky Cafe’s team that Sacred Star was thinking about. The Inky Cafe had just been where they had run into that terrifying team. Right after Inky Cafe’s match with Sacred Star ended, another team had come in to challenge them. It was this team that Sacred Star was thinking about. They watched as the team they just lost against was utterly crushed 2-0 by this mysterious team. It wasn’t a beatdown. Because to call it a beatdown would be an understatement. Inky Cafe was paper that was blown away by this team. Watching those games left a deep impression on the players from Sacred Star. And now, the NetCow Cafe left a similar impression upon them.

Sacred Star Cafe’s team knew they had lost and there was nothing they could do. But now they were all wondering what would happen if that mysterious team that had crushed Inky Cafe came to challenge the NetCow Cafe. How explosive would it be when those two teams faced off against each other? Who would win?

Dev & Shanks try to out edge lord each other!

Dev Thought: So Shanks and I will occasionally do this thing where we play edge lord chicken. We just throw progressively random and insane stuff at each other from the most chaotic parts of the internet, and wait for the other to break. Shanks started it this time with this video (https://youtu.be/F0lZ96EfSu0). Don’t worry, its SFW. It just makes no sense. At first I didn’t understand, I thought it was just a random Japanese monster horror movie from the 80s. And then it turned into something else. Shanks was literally gaining an edge as an edge lord. But I’m Dom Torretto, and I never blink. I think I won this exchange. 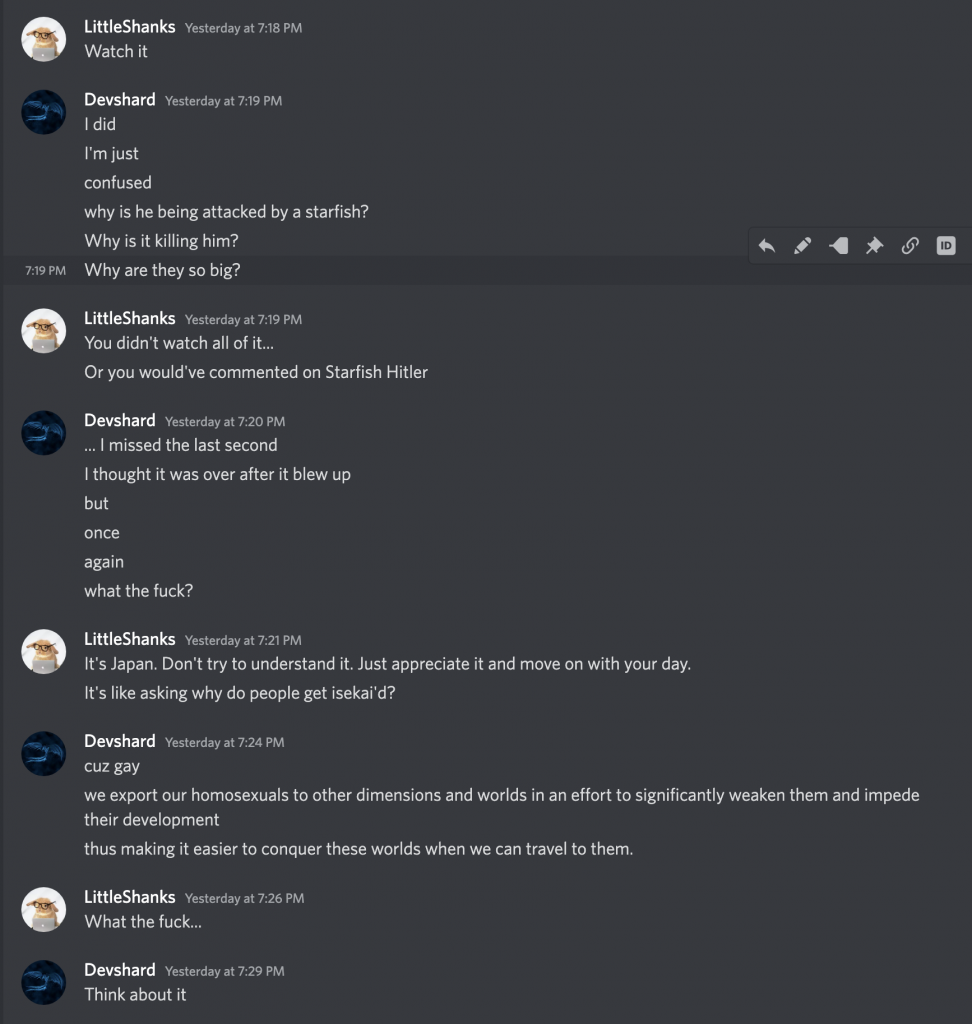